Why Gathering Competitive Intelligence Is a Must 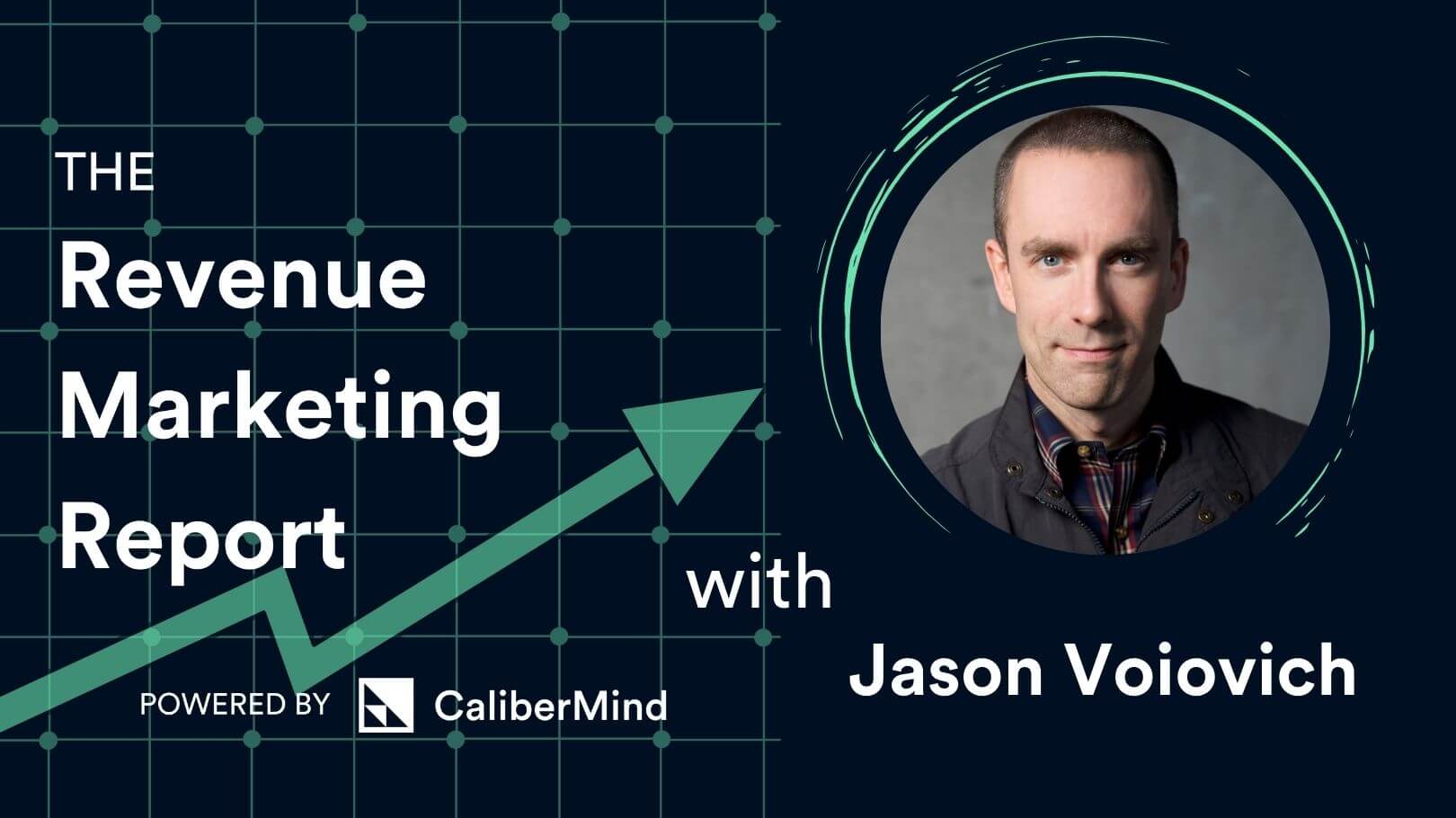 Jason Voiovich is a fractional CMO. He works with clients part-time to help them meet their strategic marketing goals. Jason is also a published author, and his latest book is Marketer In Chief: How Each President Sold the American Idea. His status as a history buff shows through his fondness of relating historical anecdotes to issues marketers and salespeople face.

Competitive intelligence tops Jason’s list of factors that can make or break a company’s trajectory. Unfortunately, too many teams don’t take the time (or see the value) of competitive research.

“Many marketing ops teams simply aren’t focused on the competitive landscape. If they are, they tend to focus on one particular competitor—perhaps at the urging of the CEO, CMO, or top salesperson in the organization.

“That’s the thing companies do to get themselves in trouble.

“In some cases, they are caught flatfooted by a new, disruptive competitor they weren’t aware of. This is why a process to ensure collecting competitive intelligence is an integrated part of marketing and business development is critical. Doing ongoing research and making it part of your day-to-day operations will deliver the benefits that keep you ahead because that’s the whole point of competitive intelligence! You want to discover things that will help keep you one step ahead of your competitors at this point in time (since the framework is always changing).” 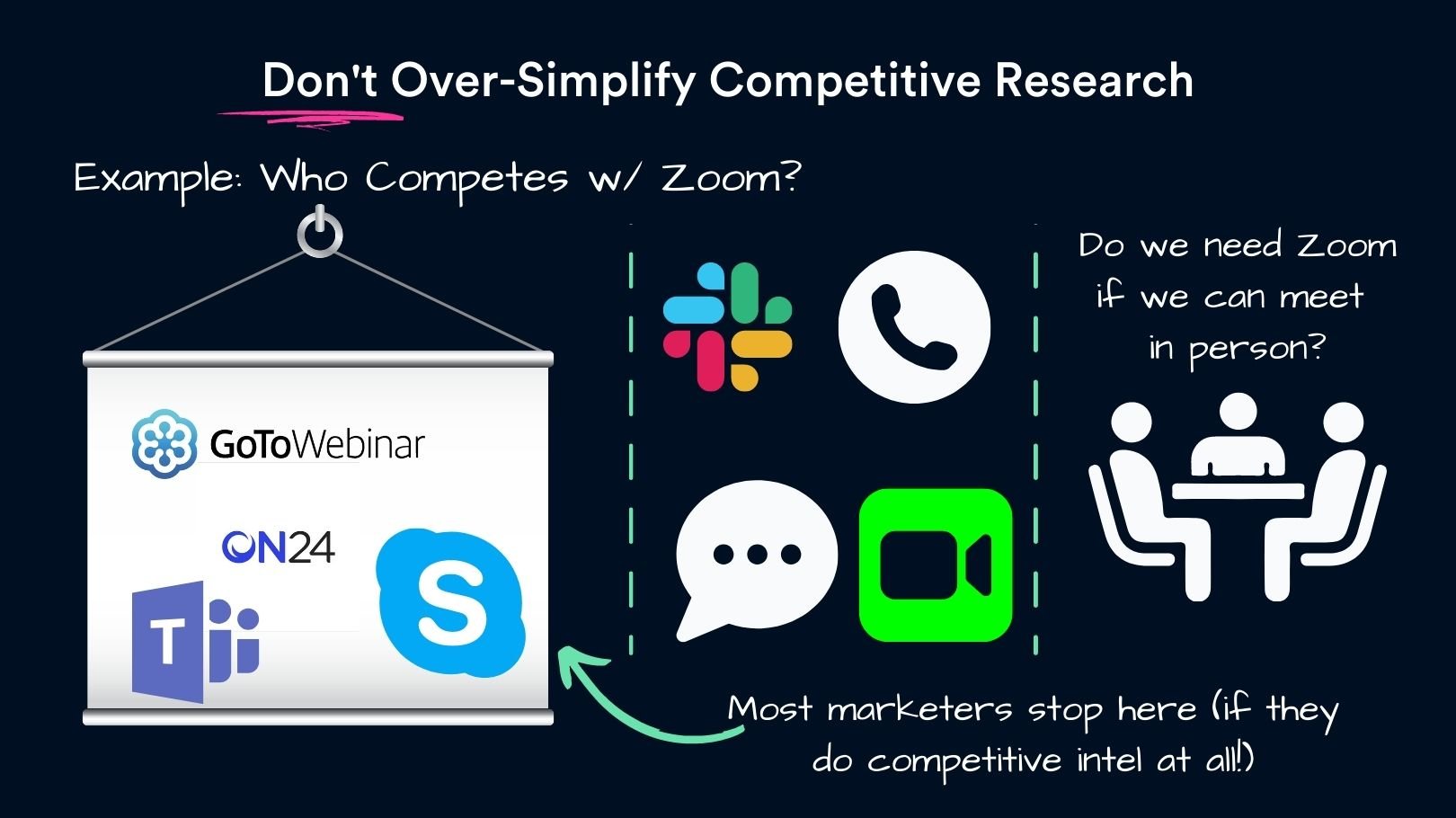 Why take the time to research each competitor? Besides helping you refine your own messaging, it helps your marketing team and salespeople differentiate their products with greater clarity. However, only researching direct competitors is a big mistake.

“When I think about competitive intelligence from a strategic perspective, what you’re looking for is how to position your organization. Differentiation is key. Another key objective is an early warning mechanism.

“Let’s use Zoom video conferencing as an example since so many of us are familiar with the tool. There are so many recording and video technologies. Who are Zoom’s competitors? Well, you may think of other video conferencing or even webinar platforms. They serve the same market. For example, Google Meet is a direct competitor.

“When you think of a disruptive competitor, you may think of Slack or Salesforce.

“But competitors expand beyond direct and disruptive. We have to think:

“Let’s say the consumer wants quick point-to-point communication. A competitor could simply be an instant messenger, FaceTime conversation, or text message. Zoom is a substitute for face-to-face communication, and a competitor includes any alternative mechanism. And now that the pandemic is starting to ebb in many areas of the country, Zoom’s competition includes going back to the office.

But where do we find information on our competitors? How do we even know what the sales team is up against?

“When you talk with competitive intelligence practitioners, they’ll talk about primary and secondary sources. The first variety is information from sources like salespeople. Competitive intelligence professionals talk about the need to go beyond primary sources. In addition to the data they’re collecting, you’ll need to proactively collect information as well. That could include interviewing salespeople, doing ride alongs, listening in on Zoom calls, or interviewing prospects. Don’t just interview customers. Interview the prospects that were lost.”

While many of us may prefer to rely on data to make decisions, the truth is that a blend of quantitative and qualitative data is needed to refine messaging. Ultimately, we’re still selling to humans, and humans are emotional creatures. Looking at an opportunity timeline and sequencing interaction data isn’t going to give us insight into what exactly inspired the purchase decision or turned the buying committee off of your product.

Selling to one person can involve a complex sequence of events. In B2B sales, the more expensive the solution, the more people get involved in a sale. Unraveling what did and didn’t work during the sales process can get tricky.

“It’s important to learn how to create stakeholder mapping and influencer mapping inside prospect organizations. These maps help us understand rational triggers in the decision-making process. The first step is always identifying who the decision makers and influencers are, which means understanding their roles at the company. Then map out when each of those people gets involved in the buying process.

“In B2B, decisions can be very complex, and competitors will come in and out of the picture throughout your sales cycle. This is especially so in large SaaS implementations. Besides the software, there might be consulting services. There could be an implementation engagement and then ongoing support. Think about the software and service packages you might put together in a complex B2B sales process, and then think about all the competitors that may offer one piece of a package or compete for the entire engagement. 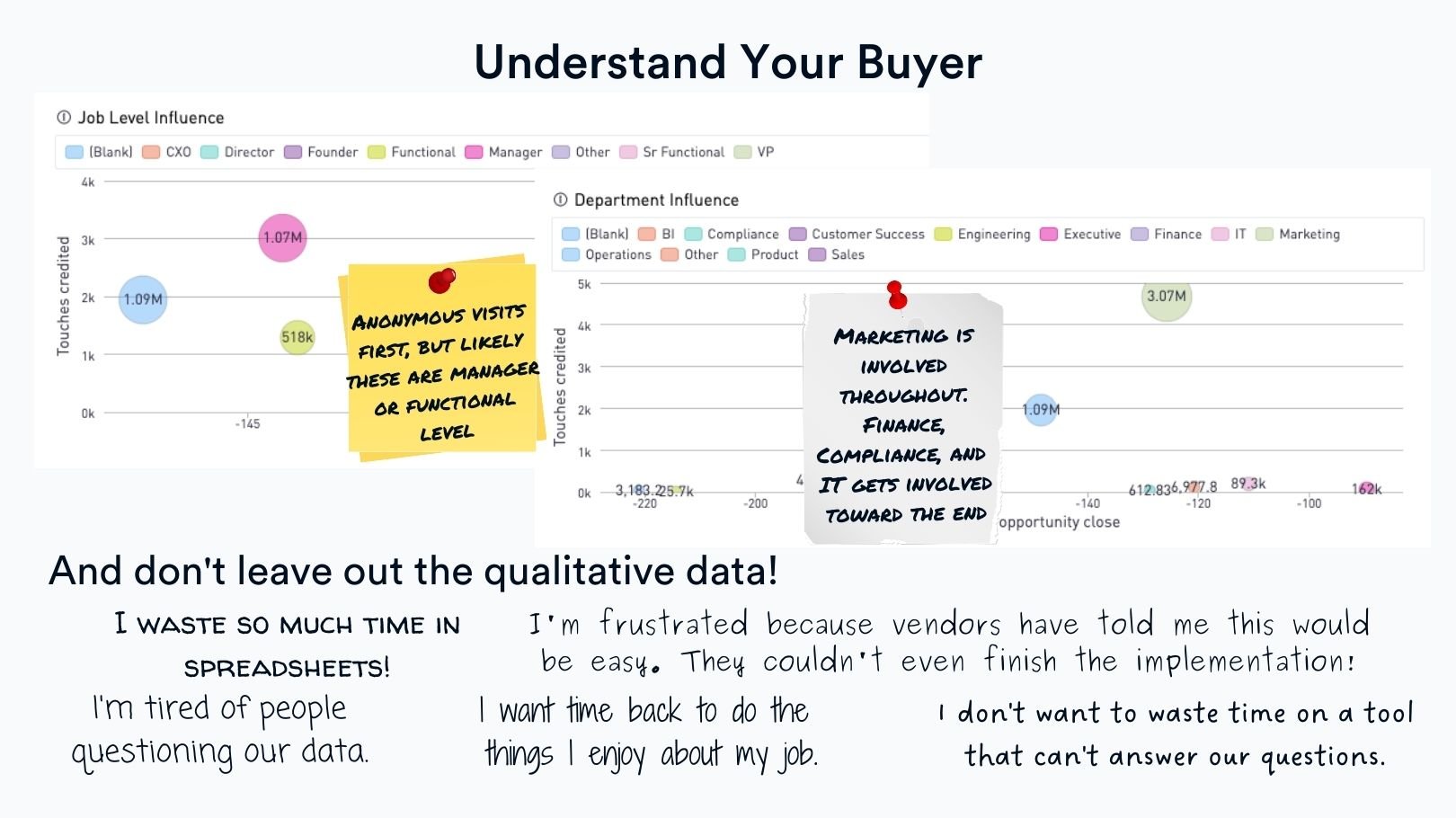 “Let’s say we’re offering a full-service SaaS implementation. You’ll sell the software licenses and perform the implementation, onboarding, training, and ongoing support. On the other hand, a competitor could come in and offer to train your organization at half the cost. They don’t provide the software. Another competitor might come in and say we’ll do everything except ongoing support—we’ve got a partner firm who will handle that.

“You have to look at all of the angles to understand what you’re up against and how you position yourself against each subset of competitors. Competitive intelligence is not as simple as going into SEMRush to see which keywords I’m competing against. That’s part of it, but there’s so much to it, especially in B2B.”

There are quite a few frameworks to choose from when evaluating competitors or creating competitive battle cards. A simple Google search will return several, but Jason provided his favorite.

“My favorite technique is known as ‘The Angles of Attack Algorithm’ by Arik Johnson and the folks at Aurora WDC. They’ve categorized four different types of competitors that help marketing teams bucket competitors into groups that make sense and are actionable.

“The first group, Alpha, are those direct feature-to-feature competitors. These are the easiest to understand because they’re right in front of you. They’re competing on little differences in features and price.

“The second group, Beta, are your low-cost competitors. Remember the complex B2B example where a specialist firm was just going to do training? That’s a low-cost niche competitor. They’re very difficult to compete against because the price point tends to be a lot lower or even free. When you compete with them, you’ll need to demonstrate how free is actually very expensive.

“The third type of competitor, Gamma, are those who disrupt the game in some way. These are competitors like Slack who’ve integrated video calls into the Slack experience for our Zoom example.

“The final sort of competitors, Delta, are disruptive indirect competitors. These aren’t a threat yet, and they’re not making money (again – yet!). But they may completely change the market.”

A History Lesson on Ethics

“One of the stories I narrate in my book is President Dwight Eisenhower and the U-2 incident. The story isn’t about Bono and the pop band U2. The U-2 was a spy plane used in the 1960s. It could fly high enough to evade missiles and fighter jets. The US could fly this plane over the Soviet Union and take surveillance photos, but the Soviet Union couldn’t shoot it down.

“The problem was you couldn’t avoid radar. They could still see you. When the Soviets learned about it, they started devising ways to take the U-2 down, and eventually, they got lucky. Eisenhower was caught in a lie. At first, he said the plane didn’t exist. Then, it was a NASA weather plane, and then all those lies compounded. 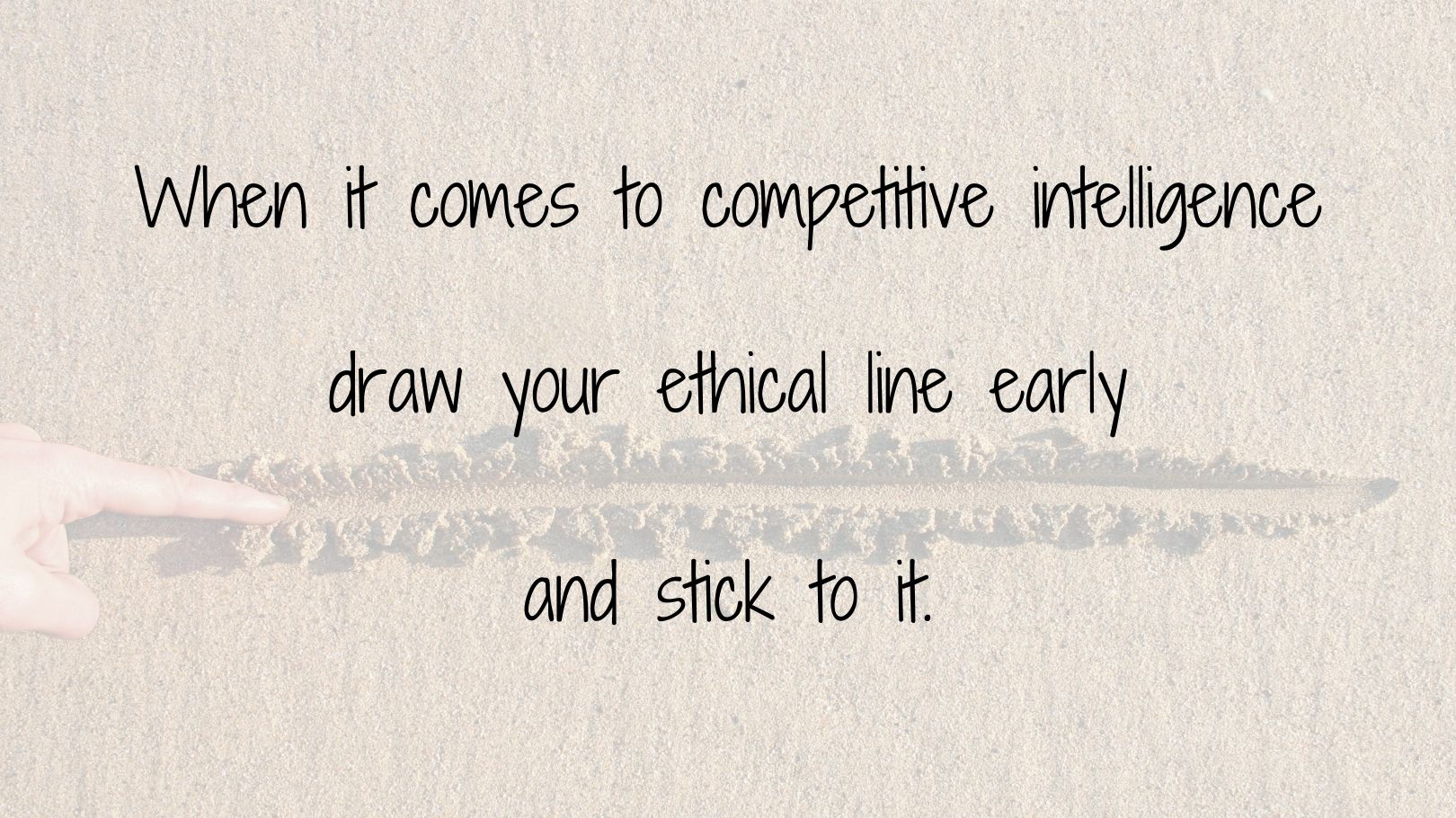 “The story highlights the ethical issues inherent in all forms of intelligence-gathering. The process isn’t free. It always has a cost to get it. Some marketing teams restrict competitive intelligence to the public domain, and others take it across an ethical line. For example, people have been caught dumpster diving—as in going through competitors’ garbage.

“Every organization needs to determine where their ethical line is early and stick to it.”

For more on the ethical concerns surrounding competitive intelligence and tactical strategies to incorporate gathering competitive data in your day-to-day processes, listen to the full Revenue Marketing Report episode at the top of the article or anywhere you podcast.