Do B2B Companies Need More than One Funnel? 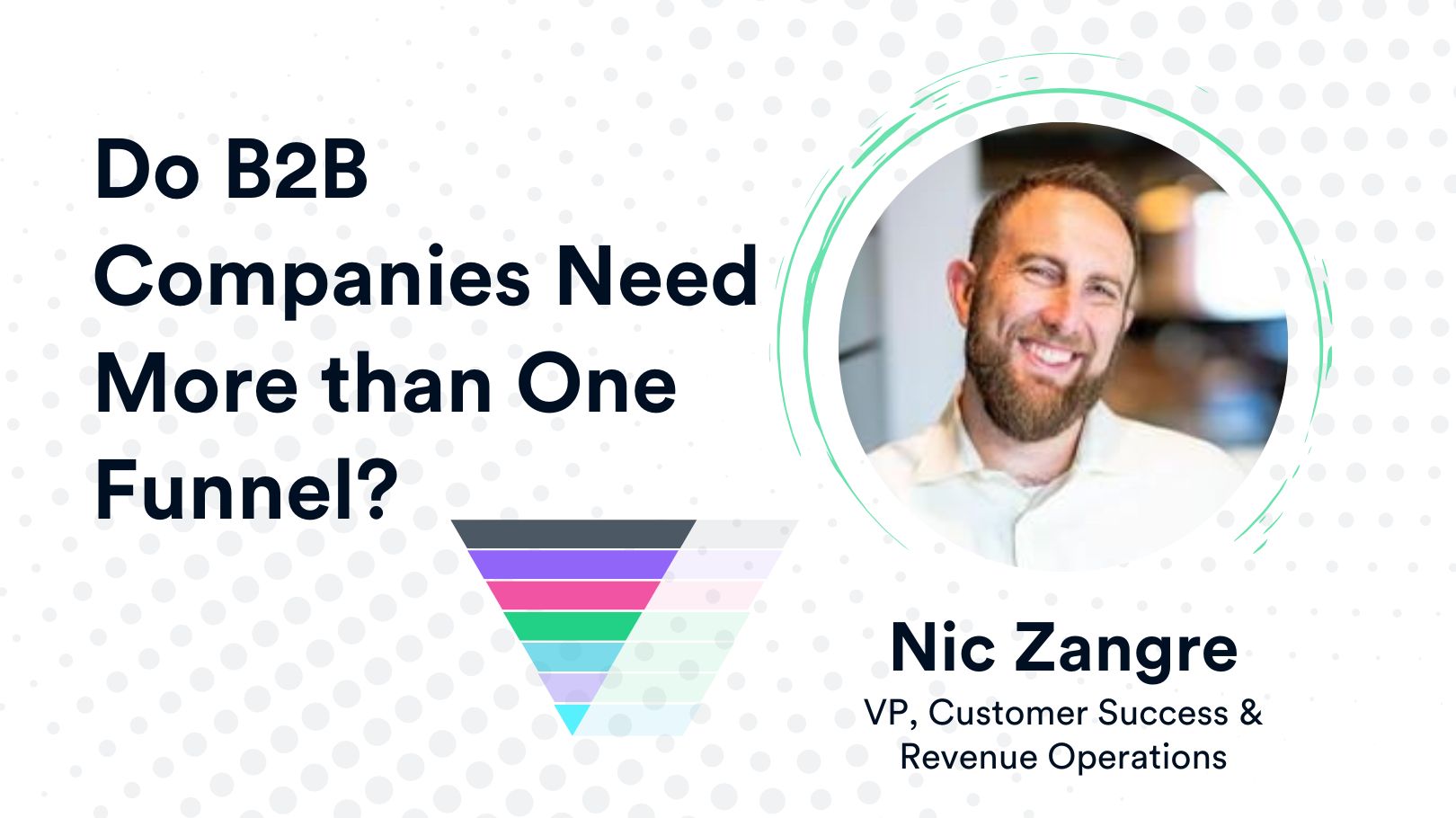 The buyer journey is seldom a straight line in B2B and often involves numerous people from the same prospect organization (AKA the buyer committee). But for some B2B companies, buyer journeys can be completely different depending upon the products, delivery method, and other factors.

The checkpoints, or steps within the funnel, may not be the same from one prospect to another.

Organizations that have a single product without recurring revenue potential can get by with one funnel; but, as a company grows and refines its offerings and processes, the need for more than one funnel may crop up.

B2B funnels are different from straight-up sales processes because they capture and track more than sales activities. As Nic Zangre, VP of Customer Success with CaliberMind explains, funnels show the revenue process, which has grown to be far more complex than it once was due to all of the new ways sales and marketing reach prospects.

“B2B customers are doing 80% of their research online without talking to anyone,” he says.

He adds that the initial Google search is ideally where a company would like to start the funnel journey – at awareness. However, even though a prospect organization’s end goal is static, the individuals working towards that goal have varying titles and department goals. Therefore, they come to the b2b buying process with varying vantage points.

When a sale occurs in the B2B industry, it happens at the organization level–or account level as it is commonly referred to. However, businesses are run by individuals, and it is important to identify when certain checkpoints are reached by a person within the buying process.

“At some point, someone has to raise their hand to speak with someone live or give you information about themselves and their business,” Nic says.

And this is exactly why B2B funnels are so important – they give a high-level view of where prospects are in the buying process and allow an organization to keep track of all the points within the process regardless of how the individuals are moving the sale forward or backward. This also explains why funnels can be challenging to set up and manage. The pain is worth it though, according to our October 2022 survey.

Setting up a funnel begins with examining the buyer’s journey. What are the stages that occur within your organization’s process? A good funnel tracks the key handoff points between teams and the progression of buyers during their journey to becoming a customer.

“Track everything, whether they engage with chat on your website, fill out a demo request form, or want to talk to a person. This rigor around data collection will be helpful in developing funnel definitions.” Nic says. “Defining a funnel starts with consensus between stakeholders on the revenue team. Build consensus around your common list of stages between sales, marketing, and customer success.”

If you start to see different stages or different processes between teams emerging, check back for consensus, then consider separate funnels. However, if the business outcomes being measured are the same, one funnel is usually enough.

Ideally, Nic explains, a funnel should work like a coin sorter that allows coins through various layers based on their size.

“If you don’t sort your money, you don’t know what you have,” he says.

Understanding the stages will tell you how many quarters and nickels you have. In a funnel, it will give everyone a view into which accounts are at the various stages in the revenue journey.

Identifying the actions that make the nickel drop (or the account to progress) allows you to measure consistently and constantly. These hand-off points need to be common to all teams so that there’s agreement on how they work and they remain a valuable reporting tool.

Nothing is perfect, so even if things aren’t exactly right, they certainly provide more insight than a blank screen. Don’t wait for the data to be perfect – it never will be.

“I think people just have to get started somewhere,” says Nic.

When a Funnel Isn’t Really a Funnel

The “purchase funnel” concept dates back to 1898. E. St. Elmo Lewis coined the term with 4 stages (Attention, Interest, Desire, Action)–this predates television, telemarketing, direct mail, and the internet. There are many, many more complexities today, but the same basic mathematical concepts apply. There have been many different shapes and analogies proposed to improve upon the original funnel. Nic mentioned circular funnels, infinity-shaped funnels, flipped funnels, and bowtie-shaped funnels. Which one is “correct?” (Spoiler – the metaphors and stage definition for funnels has improved, but the same measurement concepts apply)

SiriusDecisions furthered the thinking for B2B in their SiriusDecisions Demand Waterfall, which was inspired by the funnel but overlays common milestones in B2B lingo– such as AQL (Auto-Qualified Lead), SAL (Sales Accepted Lead), and SQL (Sales Qualified Lead). Each stage represents a measurable handoff process.

The flywheel funnel focuses on customer growth and user adoption. This framework is becoming popular in Product-Led Growth organizations and is also championed by HubSpot, as a model that puts delighting the customer at the center of the model.

There’s also the bowtie which is similar to the flywheel in that it celebrates the post-sale activity. It’s championed by B2B SaaS Firms, like Winning by Design. Interestingly, it’s two connected funnels side by side, and can be measured like a traditional funnel.

Which Funnel Is the Right Funnel?

We know people get tired of hearing “it depends,” but a one-size-fits-all approach is typically the wrong approach. Which funnel(s) you use depends on how your organization sells and retains customers.

Nic says, as companies become multiproduct, multiregional, or adopt a target-account strategy they may adopt account-based marketing funnels, or “Flipped Funnel”. These funnels start with a small list named accounts and its goal is to grow engagement.

“But what we usually see is at least two,” he explains. “You have an account-based funnel and then you have a demand generation funnel. If you have a renewal cycle, then you have a customer funnel as well and the funnel starts to look more like the bowtie.”

He adds that in challenging economic times, the bowtie and flywheel strategy get more attention because the top of the funnel traditionally dries up and companies need to turn inward to their customer base. The focus on delighting customers is meant to lead to better retention, cross-selling, and upselling across different business units and regions. If you’re only focusing on the traditional “new business” funnel, you’re missing out on a huge opportunity.

The BIG Questions: People and Process

Perhaps the first question to ask in setting up or revamping a funnel is: What are my organization’s processes during the buyer journey? Take time to understand what employees need to do to move an account through.

For example, Marketing needs a flag to indicate to Sales when it’s time for them to follow up on a lead.

Understanding processes like this requires a cross-functional project team which generally includes sales operations, marketing operations, revenue operations, and an executive sponsor from sales and/or marketing. This team should be able to identify the ultimate goal (moving from spreadsheets to more automated systems; rolling out account-based marketing) and understand the sales cycle.

If the sales cycles, handoffs, and customer journeys are different as you take this top-to-bottom review, you’ll want to incorporate multiple funnels.

How the business sees its customers will determine activity and reporting. Are customers account/logo based? Or are they individual licenses?

If you answered “both,” you’ll need more than one funnel. It goes back to the business strategy, Nic says. Different go-to-market strategies and different product lines require different funnels for accurate measurement, tracking, and reporting. Many companies combine a “Freemium PLG” model to attract individual users while using a SiriusDecisions Waterfall for their more traditional enterprise sales. They are two completely different yet complementary strategies with the same goal of growing the business but must be measured differently.

“I just watched a series on Netflix about the creation of Spotify called The Playlist. Even though their company is known for being B2C, it’s a great parallel to measuring engagement and conversion: They have a funnel converting free users to paid users, but they also have a funnel of music labels and artists they need to post their songs to feed the users’ demand for new content. There’s also an advertiser funnel to better monetize the free users. But delighting their users so they spend more time on the platform makes all the rest possible.”

Of course, if you have a simple business model, you may benefit from multiple funnels. But every B2B company should have at least one. It is worthwhile to start by measuring one revenue stream and conversion rates and the stages you can identify–but don’t forget that your customers make everything possible! The funnel can help you understand where there are sticking points in your buyer journey or friction between teams, which you can learn more about by clicking here.

Within many funnels, one lead’s action can trigger multiple in-house activities. For example, in the Spotify example, if a lead watched a YouTube video about how Spotify works for retail stores to generate music in various departments of a store, that may trigger the sales team. It may also trigger marketing to provide information relative to the video.

It takes time to walk through each scenario and understand how the funnel (or funnels) will be designed to reflect advances in the process.

What Happens When the Business Changes?

Funnels are far from finite. This isn’t a case of setting one up and walking away. Businesses change, products change, and strategies change. Some funnels can adapt to the changes and some can’t. Some changes require additional funnels.

The most common need for multiple funnels Nic sees is when a company offers a free trial model and an enterprise funnel.

“Free trials, they go into that self-service funnel, swipe a credit card, and maybe get some emails in the future–but they don’t ever really talk to anyone,” he says. “Then there is the strategic account funnel, catering to prospect companies over 1,000 employees, which should be treated differently.”

It all comes down to your chosen go-to-market strategy. The more differences and variations there are, the higher the likelihood you’ll need more than one funnel.

Still not sure where to start with funnels? CaliberMind can help; we have expertise in working with multi-funnel organizations in the B2B space. You can learn more about our B2B Funnel solution here.